“She had always wanted words, she loved them; grew up on them.

January is tricky. I don’t know if this happens where you live, and I’ve been back in the Pacific Northwest long enough to have scrubbed memories of common, dull Januarys elsewhere. But there is no darkness like that of a January morning. In fact, here at least, Sunrise simply defies the Solstice that is weeks old—rising later than ever, while Sunset tugs at the other end, stretching away from the day, striding farther across the Pacific Ocean. I notice the creeping length of the afternoons in increments: Last week at this time it was pitch black when I left class, now there is a faint glow of white across the Olympics. But the mornings. Oh. They grow heavier and darker.

I used to watch the calendar—where the timing of Sunrises and Sunsets are writ in tiny italics—for the day deep in January when the sunrise began to tick backwards. On that day my soul would inhale deeply and rise toward the light.

This year, though, I haven’t minded. I’m out early most mornings, grasping a chunk of fresh air and getting a few miles under my feet before I put my seat in a chair. Something about starting in the dark, in the privacy of absolute shadow, allows me to hold my inner stillness for a little while longer. Several miles later, as I close the distance between hill and home, it is light and I must reenter the world, share the sidewalk and the rain with other bodies, others’ thoughts.

It’s the first time I can recall ever embracing January (except, of course, in New Zealand, where January is a cathedral of light and July is an ache of chill and damp.)

Last January I joined the practice of naming a word to define the year to come. My word for 2015 was a sensation, a representation of feeling, a metaphysical concept wrapped up in a gorgeous set of syllables: charmolypi, loosely translated as joyful sorrow, a kind of letting go.

This year, however, I am going with something simpler. A verb. A drawing in, rather than a letting go. 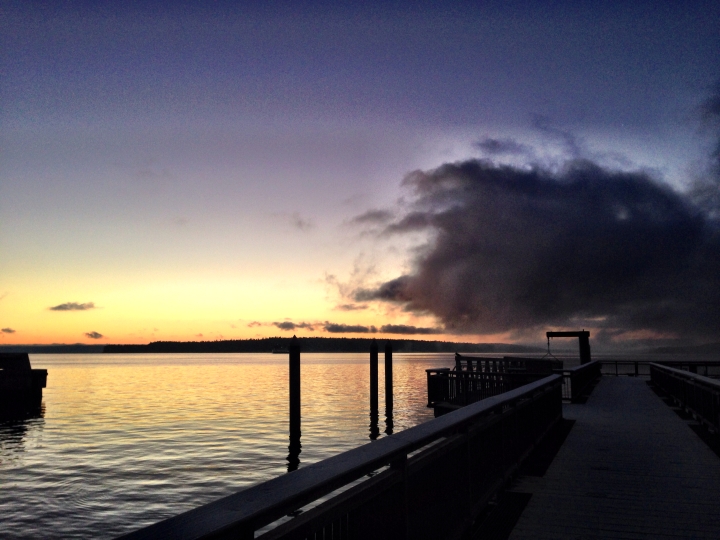 Embrace. The solace of shadow, the singular sweetness of the dark season. No longer keeping my head down in January, simply waiting for the darkness to end.

Embrace. This season of madness. Book launch two weeks away, my every moment accounted for, writing guest blog posts, doing interviews, preparing for book talks, this busyness that borders on frantic as I reach out, connect, and try not to slip on the ice of my own expectations.

Embrace. The distant sparkle of creativity, the flashes in my periphery, reminding me that although I am here now and the open meadow of the blank page is a few days’ journey in the distance, I’m only just visiting and I’ll be back my story home, soon.

Embrace. That pain deep in my hip and groin grinding like a pepper mill. I’ve stopped running, perhaps temporarily, perhaps for good. And as my hips shake loose and my back releases from the confines of a runner’s constricted muscles, I have access to yoga asanas I never thought possible. My body, embracing me in gratitude, my ego rebuilding. I walk 8 miles in my running shoes. I feel no pain.

Embrace. The softening of my shell in the warmth of others’ support. The love and encouragement that has come my way in the past year leaves me trembling. I shed a carapace of doubt and insecurity and learn to accept others’ generosity with grace and in wonder.

Embrace. The singularity of this time, as uncertain and strange, as full of bright lights and blue shadows as it is. For it will change, as all moments do, blurring into the next or bursting apart like a camera flash.