“She left pieces of her life behind her everywhere she went. It’s easier to feel the sunlight without them, she said.” ~Brian Andreas

What I have here are two tickets to see the Seattle Symphony performance of Camille Saint-Saëns’ “Organ Symphony” conducted by maestro Ludovic Morlot. Next weekend. Stellar seats – Orchestra Center row H, seats 7, 8. These are our seats, you see. This is the last concert of our season package.

We could go. It’s a Sunday matinée; we could make the peaceful hour drive to the Bainbridge Island ferry terminal, leave the car and walk on for a relaxing 35 minute crossing of the Puget Sound to Seattle’s waterfront. There could be a picnic lunch of fixings from Pike Place – a salmon sandwich on rosemary bread from Three Girls Bakery, a bag of Bing cherries and tender-sweet apricots from Corner Produce, truffles from The Chocolate Market. Then a stroll down to Benaroya Hall for two hours of aural heaven. We’d be home by dinnertime.

But this is the second time we’ve planned a return trip to Seattle since our move, only to look at each other at nearly the last minute and ask: “I don’t wanna go back, do you?” And for the second time the answer is: “Trade here for there, even for an afternoon? That’s a negative, Sailor.”

Each place has its time. Imagine if those freeway signs informing you of commute times could flash your residential expiration date: <<Julie: Please Prepare To Leave In 5 months, 4 days, 3 hours>>. It would be so nice to know when you should start collecting boxes from your neighborhood grocery store.

Some places I left before my time had reached its true end: Chad. New Zealand. Others I never thought I’d stay as long as I did: Ohio. Destinations unplanned and all the sweeter for the interludes: Colorado. Japan. Illinois. Places I’ve lived, but never tire of returning to again and again: France. And those where I am completely at home even though I’ve never claimed a fixed abode: Ireland. Sonoma County. 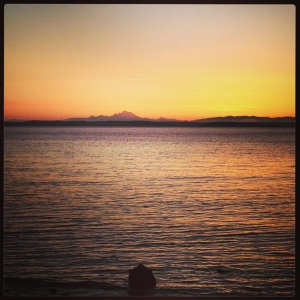 I made this move with trepidation, even though it was the place we had long ago determined would be the place, the last place we would call home. I feared the regret of leaving a place I loved before its time. I feared the longing for the hard-fought familiar, the comfort of routine, of feeling I was where I belonged.

But what I feared most was the silence. When we last moved to another idyll of mountains and sea, with nights so quiet you could hear the stars falling, the silence fell over me like a thick wool blanket. It smothered all rational thought until I could hear only the sound of my muffled cries as I tried to claw my way back. That took such a very long time.

We left that island for a blue and green city of glittering high rises and snow-capped peaks, farmers markets, cafés, concerts, and freeways frozen like airport parking lots, wailing sirens and booming jets. The bustle and chaos – the presence of millions of others and their dogs and Subarus – was a balm to my raw and lost self. It gave me a renewed sense of life and possibility.

But I am not the same person who was once blindsided by peace and quiet. This silence is not that silence. And the sense of possibility and renewed joy for life are not fed by brewpubs or bookstores, by traffic or meetings. They come from within.

Story setting came up during a recent meeting of a virtual writers’ group I connect with on Sunday afternoons. We were discussing what informs our work. While characters and their stories sustain me, the spark is most often initiated by places where I’ve lived or traveled: a writer’s cottage in a Bavarian garden; a tiny hotel room in Tokyo; a slaughterhouse in rural New Zealand; a castle ruin in the Pyrénées. My writing has a vivid sense of setting because place has so often defined my soul.

And now, on the tip of a peninsula forming the break between the Strait of Juan de Fuca and the Puget Sound, in a small town of rainshadows and storytellers, of porpoises and poets, of farmers and boat builders, I am embracing my redefinition.

I don’t know if this seaport of part-time work and full-time dreams will appear in my writing. Perhaps it’s just meant to be the place where I write.

In the meantime… Saint-Saëns anyone?

4 thoughts on “Leaving Pieces Behind”